When the Elderly Educating the Young: Forum's Winning Project 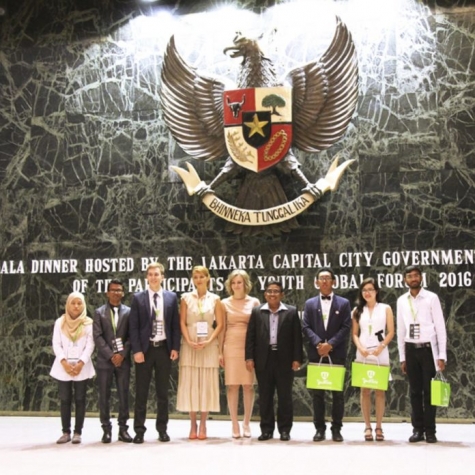 The Youth Global Forum 2016 in Jakarta has concluded. Over the course of four days, more than 100 young people from 29 countries were gathered together to come up with interesting solutions for sustainable social development. Seven youth initiatives “battled” for the Forum’s main prize – a realization grant. And the winner was a young, but experienced, social entrepreneur from Russia: Olga Lakhnova, with a project targeted to fight the isolation of elderly people by allowing them to help with educating children. Olga plans to launch a social club in Moscow where local retirees will be able to use their knowledge for good by educating children through one-on-one instruction or in “classes” consisting of small groups. According to Olga, this will help elderly people to fight isolation and will give children the opportunity to obtain additional education for free. In this interview Olga explains the concept behind her winning project.

Olga, when did you start to develop the idea for this particular project? How did it actually come into being?

A few years ago I was motivated by a creative and social contest which took place at my university. It offered an opportunity to win financing from the City council of Moscow. It was the place where I demonstrated the project for the first time. Unfortunately, it wasn’t polished as well as it is now, so I only took second place. Then my life went in a totally different direction. For a certain period of time, I worked on a social project called “People Friendly”.There are plenty of organizations like “Animal Friendly” and “Ecology Friendly”, but fewer initiatives which are focused on helping people. Creating a project which would be dedicated, figuratively speaking, to helping people was of great importance for me. It was a successful project, but when it ended, I decided to get back to the project “Senior to Junior/Fight the isolation of the elderly”.

Now you’ve received a grant. How are you going to realize your project?

After I presented my project in Moscow, I got an opportunity to go to Germany to take an internship. While in Germany, I consulted with people who were engaged in different social activities. I studied the types of activities which were conducted with elderly people and children. Frankly speaking, I had a totally different idea regarding that situation. It was immensely important for me to inspire co-operation between two generations, because in the best case scenario, we would be able to give plenty of good things to each representative of each generation. I have some connections in the Social Security Department of Moscow. They have various data on elderly people: they can say how many people are living in a certain neighborhood, and, for instance, Nina Petrovna might take interest in our project, while Ivan Petrovich would definitely refuse. I am going to start by studying this data. Moreover, I think that in the initial stages of project realization, social workers or psychologists should be present at the general meetings. Communicating with children and elderly people is not an easy task, it will be necessary to break the ice and forge trust in each other.

What age group with regard to children are you talking about?

I am talking about school children because, in my opinion, we can’t take pre-schoolers: this will not be a kindergarten where you have to take care of kids. Besides, each elderly person will be in a particular physical and mental shape, and I’m not sure that we would be able to handle them all simultaneously. Therefore, the participant in our project should be 7-years-old or older; those who can take care of themselves, who can be responsible for their actions, who can think about what they are doing, and so on.

The motivation of children would come primarily from their parents, since apart from elderly people, there are plenty of families in Moscow who aren’t poor but are not rich either. They just don’t have enough money to pay for the full range of educational programs. For instance, you have a child who is immensely talented and gifted, but you can’t spare 3 thousand rubles to pay for his chess class, tennis class, and many others, but you really want your child to get that knowledge. I can provide a personal example, my friend has a child who is vastly talented. He is 7 years old, and he has a real knack for chess but, unfortunately, due to some financial problems, he can’t go to chess classes anymore. It is absolutely wrong, we are nipping the potential in the bud. If we find a senior person who agrees to teach children some chess, we will solve this problem.

The meetings will be conducted by volunteers, in other words, some people are going to teach for free while other will study for free, am I correct?

In an ideal world, taking into account my ambitions and idealistic views, I would like to get support from the state, as well as some financial investment. If some families stepped forward to state their willingness to give us some money, that would be great. However, that help doesn’t necessarily have to be material – moral and physical help would do as well. Helping an old woman to walk home or to the grocery store – it also means a lot.

What is the approximate location of the project, is it in a certain area, the whole city, region or country?

We will have to choose the actual location. At the initial stage, it would be a certain neighborhood in Moscow. I would have to talk again with the representatives of the Social Security Department and other organizations in order to inquire into such issues as the areas where the majority of elderly people live, accessibility issues, etc. Currently, I am looking into the Novogireevo and I know that there are definitely senior residents who are willing to start working with us. Besides, there is a social center, TSO, which is accessible and open, but it requires some modernization.

How are you going to invest the grant from Youth Time?

I think that, in any case, I am going to spend some of the money organizing the working space. I’ve been drawing up the budget, and I notice my primary areas of expenditure are such items as computers and a piano. In other words, pieces of furniture and equipment. I’ve also allocated some funds to the recreation area because we are not going to dedicate all our time to studying and organizing groups. It is very important to establish an informal communication between the two generations. I see it as a sofa where we would have refreshments.

Who is going to realize the project? Is it going to be solely your efforts or do you have some associates who would work alongside you?

Yes, I have people who are willing to work for the same cause, but I have to stimulate them and tell them that they are no longer my potential associates – they are my actual associates. I can easily gather and organize volunteers because there is an excellent local website in Moscow called “Help Me”. It has plenty of users who are waiting to take part in projects. When I contact them and explain the details of this project, I will find marvelous support. Besides, I have a lot of friends who are working at different state departments with whom I’ve visited orphanages and hospitals and organized parties and other events – I can contact them, too.

How are you envisioning your project in a year’s time? Swekshya Neupane from Nepal, the winner at last year’s Global Forum, made a presentation at the opening ceremony about the realization of her project. How do you see your presentation?

In a year’s time, I would like our center to be fully operating. I want to see an elderly woman who is knitting together with two young girls. I want to see Artem playing chess while some older person is teaching him the aspects of the game. If I see this, I will be really glad. I have to see it working.

Apart from the grant, you have also received a scholarship at the ESEI Business School in Barcelona. Are you going to go there?

Yes, most certainly. I’ve always been and I will remain a self-taught person. It is a great thing, but an extra education won’t hurt. Besides, I think an education abroad will help to make my project better. I’ve attended the Global Forum, and it has radically changed my life. After my presentation, I wrote a post in my closed social network about my intentions and accomplishments. It is very important for me to get to know and to see it with my own eyes that my thoughts will be shared with people from different parts of the world; what I am saying is not an ideal fairytale but a life in which many young people believe, which they can create around themselves – I have found like-minded people. Such a world exists, it really does, and it invigorates, which is fantastic!