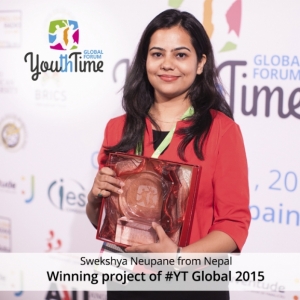 Youth Time Global Forum 2015 has been wrapped up. Over the course of three days, lots of interesting discussions and gatherings occurred. People from all around the world participated and exchanged ideas, but the main attraction of the forum was the projects competition. 16 youth initiatives “batteld” for the main prize of the forum – a realization grant. And the winner was fabulous Swekshya Neupane from Nepal thanks to her very important social project “Health for female community leaders”. Swekshya is planning to launch a six-month-long educational project for 200 hundred women in Nepalese rural areas. However, it’s better to allow Ms Neupane to explain the concept behind her winning project.

So the first question is, tell us about the project and most of all about its relevance for the community where you plan to implement it.

Well the project basically focuses on educating young female leaders from two areas. I’ve chosen two areas, Khokana and Bagmati, because as I witnessed in the areas myself during the time of the earthquake, the state of child healthcare is really pathetic in these areas. So the project aims at bringing young people and sharing their ideas in order to educate females on child healthcare. Later on I’m planning to replicate the project, if it becomes successful, in other parts of the country. So in the long run I think it is a sustainable and smart project and basically, I’ve chosen four areas regarding child health since they are the conditions which lead to child mortality, which is very high in Nepal. The main causes are diarrhoea, pneumonia, malnutrition and malaria. So what I’m planning is to make females aware at least, about the signs and symptoms of it.

So mothers to be able to protect their children?

Yes, exactly. Sometimes women look but they actually don’t know what is happening to the children so I think if a woman from one family is educated she can pass that onto her children, husband, her community. At least she’ll be able to identify some signs of pneumonia. Another one is for diarrhoea, I’ve planned to provide oral rehydration solution which is the supplement which helps in maintaining the electrolytes that are lost during diarrhoea. What I’m planning to do is – wares can also be prepared in the household itself, you don’t need to have the material. It’s just educating them by using salts and sugar in lukewarm water. So I’ll be teaching them along with our team to know how to prepare the wares and how one can prevent diarrhoea. Then there’s more awareness regarding malaria. In this session I will tell them about the importance of use of mosquito repellents, bed nets and also about the signs and symptoms of malaria. So it’s more health oriented.

To clarify, the people who will implement the project with you, they’re your schoolmates or…who are they? Doctors…? Young doctors?

Yes, young doctors like me. They are also doing internships. We’ve recently graduated. We have to undergo an internship of one year and doctors around. We have been part of different organisations in the past as well, and organised various health camps and collaboration programmes. We’ve done many things, even voluntarily, without concern about the funds or anything, and since this time we have got such huge support from everyone. So I’m looking forward to it.

What is the budget of the project?

It is 10,000 USD. If you want me to clarify it, the main cost would be for comprehensive training since it requires the mobilisation of doctors. I can do it but not everyone is going to do it for free. They need something, whether it be in the form of participation certificates or anything else. For basic training we need certain materials. Since we have to cover many people and we need to do it simultaneously we need to have projectors, videos – everything needs to be arranged for trainings. Supplements and resources are something that we need to focus on as this is the main priority right now. This includes oral rehydration solution. But the main amount is for comprehensive training. Then travel costs, since the two areas, though they are quite near Kathmandu valley, they are very hard to reach. Khokana is reached easily, however, Bugmati is something that requires a lot of time to reach. No vehicles go there. We need to walk and we need to stay with the locals and for that we need to convince them, the locals, as well as the participants, young doctors, and others. And there’s the operational cost for the sustainability of the project.

Will the training be in the homes of these women or will it be centralised somewhere, that is, will you have some kind of place where the training will be?

Yes, we have it. But we are going to conduct it in the area itself, the villages, in certain… for example, libraries that are empty, where we can perform this. So it will be based on questionnaires. We’ll ask the women to fill in the questionnaires, to find out about how interested they are because it’s of no use giving knowledge to those who have no interest. But I am sure, that they will be interested, because it’s a basic need right now.

How has this problem become so acute? Is it because women don’t have enough education in Nepal or because medical care is too expensive or just not accessible to them?

I think it’s both, as women are still lagging behind in Nepal. They don’t have access as much as males have. They are always considered as secondaries, minorities. At the same time, health conditions are also something that is often neglected and it is not disseminated. There are health facilities but only for the rich or those living in the capitals and for the males. It’s not disseminated, or decentralised. It is both things.

And how do you see the development of this project after the first stage from January to June?

I think there will be progress in the attitude and knowledge of the women and for the progress I’ll have a continuous training session, like an examination. We’ll give an examination to the women who are there, who have been trained, to evaluate and to know about the knowledge, how much they understood, are they practising or not? So we’ll keep on monitoring them.

And you said that you recently graduated. So why do you personally prefer to go into such social initiative, which will definitely cost you a lot of personal resources and energy? In Europe, what a lot of students do after they graduate is rush to find a job. What is your personal drive to do this? Do you think you will mix your work in the hospital with the project?

Although I’m a doctor, I also consider myself a social entrepreneur. Since my childhood, I’ve always been active in social work, extra-curricular activities. Definitely, since I’m in this profession, I would like to use my skill, my ability, because I can gather people, I can provide knowledge, I can do it for free but I don’t know about the people around me. So I can have that collaboration and help towards it, and I think it’s also helping me in one way or another. It’s a great platform for me to launch such a project at this young age. So it would be wonderful. I’ll have the members from the hospital – my friends, colleagues from the hospitals – but I won’t be doing it in the hospital itself at the moment.

So, you prefer to be a change maker rather than part of a traditional system.

I am not decided about that yet. Let’s see. Maybe yes, I have this aim of working for NGOs. I have the members from my hospital – colleagues – but it won’t be focused only on the patients, it will be on the community as a whole, society, which is lagging behind right now in Nepal.

Just for some statistics, you said that mortality in children was really high. Do you have any numbers? Any percentages?

The percentage of child mortality is 54 per 1000 live births. It’s very high. It has been improving compared to previous years. So that is what makes the project even more positive. It can be achievable but the thing is a lack of knowledge, resources, something that is hindering us. So compared to the previous years, it is improving, however, it can be improved to a bigger extent. I wish to contribute to that as well.

We wish you a good luck, Swekshya!