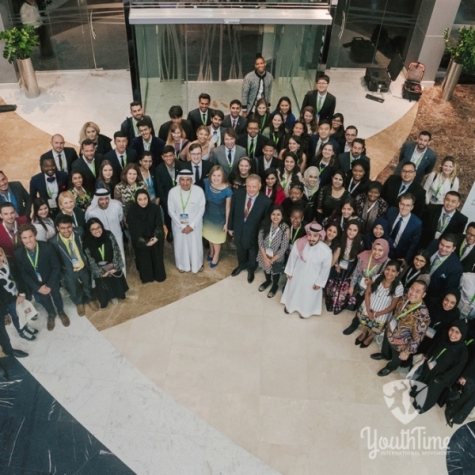 From 23rd to 27th of November, Youth Time International Movement in collaboration with the General Authority of Youth and Sports Welfare in the UAE hosted its third annual Youth Global Forum. The location for hosting the event was the cosmopolitan metropolis of Dubai with the forum bringing together experts and participants coming from a diverse range of countries and backgrounds. Attendees were exposed to a variety of innovative masterclasses and workshops which touched upon topics related to the overall theme of the event – Ethical Entrepreneurship in the Time of a Competitive Knowledge-based Economy. Further, thirteen social enterprise projects were presented by participants with one winner receiving Youth Time’s Idea Grant to convert their idea into a reality!

On a warm winter evening in Dubai, participants who had journeyed from far and wide gathered together to join honorable guests and experts at the venue which would serve as home to this year’s Youth Global Forum – the government building of the General Authority of Youth and Sports Welfare.

The event commenced with an opening ceremony moderated by Youth Time International Movement veteran and former ambassador, Themistocles Papadimopulos. As he reflected on the positive impact and influence previous Youth Global Forums had contributed to his life, his remarks enlightened participants on what they could expect to achieve during their time in Dubai. This sentiment was reinforced when after being invited to the stage to make her opening speech, Ms. Julia Kinash, President of Youth Time International Movement posed the question to participants, “Exactly what is the Youth Global Forum to you?” Following several varied answers from the audience, Ms. Kinash continued, “For some, it is just another event. For others, it will be a turning point in their life. To us, the organizers, the Youth Global Forum is a way of paying back our social responsibility. But predominantly, it is a place where we give a chance to extraordinary youth from around the globe to find new business opportunities and partners, build their professional network or even to find the inspiration to create positive impact in this complicated world.”

The opening ceremony was followed by a beautiful welcome reception which took place in the stunning gardens at the Park Hyatt Hotel. Here, participants had the chance to get to know one another over a delicious buffet style dinner which was complemented with music from a live jazz band and other performances. It was clear to see that the participants had quickly made friends with one another, with the vast majority joining together on the dance floor shortly after speeches were made partners and ambassadors.

The next day began early, with Mr. Roman Vishnevskiy, Managing Partner at United Traders LLC opening the morning masterclass session with his presentation on, “Cryptocurrency as an effective tool for startups.” The teachings of the session went down very well with the participants and the morning’s activities were only made more successful when Mr. Yousef Khalili, Head of Smart City Consulting Practice and Smart City as-a-service at NXN presented on the topic, “The role of young entrepreneurs in the future of smart cities.”

Following lunch, the program for the afternoon was set aside for project presentations made by young social entrepreneurs who had sent through their initial proposals for assessment months before the event began. Thirteen projects that fell under the categories of empowerment, education, sustainable environment and social innovation were presented in front of fellow participants and a jury panel made up by Ms. Julia Kinash, President of Youth Time International Movement, Dr. Vladimir Yakunin, Chairman of the World Public Forum, Dialogue of Civilizations, Dr. Allam Ahmed, President of the World Association for Sustainable Development, Mr. Jimmy Gani, CEO of IPMI International Business School in Jakarta, Indonesia and Mr. Goran Luburic, Vice Dean of Youth Time International Movement’s valued partners the Zagreb School of Business in Croatia. Following each round of presentations, a Q&A session commenced whereby the audience and members of the jury panel were invited to delve into further details for each project. The presentations were followed by a voting process whereby each participant was asked to vote for an overall winner and state the reasons behind their choice. The results of the voting would be announced during the closing and awarding ceremony two days later.

Inspiring masterclasses on the roles of both individuals and technology in a sustainable knowledge-based economy led by honorable guests Dr. Vladimir Yakunin and Dr. Allam Ahmed respectively kicked off the third day. After a spot of lunch, two rounds of workshops were conducted by esteemed trainers who had travelled from all corners of the globe to be at the event. The educational and interactive sessions were centered on topics which encouraged participants how to think ethically and sustainably in business. Workshop titles included, “Utilizing blockchain for social innovation” which was hosted by Mr. Mohammad Shaheed Khan and, “Social factors that influence knowledge development and knowledge management techniques” led by Ms. Dorotea Milas. Among others were, “Strategies for smart city startups” conducted by Mr. Yousef Khalili and, “The importance of ethics in the process of digitilization of life” led by Dr. Delfina Fantini van Ditmar.

The final day of the event began with the Youth Global Forum’s traditional closing and award ceremony in which guests of honour including His Excellency Ibrahim Abdul Malik Mohammed, Secretary General of General Authority of Youth and Sports Welfare and His Excellency Khalid Al Midfa, Assistant Secretary General were present. After a round of speeches made by honourable guests and Youth Time International Movement’s partners were made, it was time for the moment everyone had been waiting for, the announcement of the winners of the projects competition.

During the jury panel discussions two days earlier, it was decided that due to a large volume of high-quality projects presented, some additional prizes would be awarded. Ms. Suaad al-Hammadi of the United Arab Emirates was the first to receive an additional award for her project on providing a platform to help expose the talents of Syrian refugees, winning an internship with Youth Global Forum sponsors AIESEC. Mr. Adam Taufan Firdaus of Indonesia was then announced as the winner of the first special prize for his project on organic waste management, receiving a six-month internship at the IPMI International Business School in Jakarta, Indonesia which was kindly awarded by Mr. Jimmy Gani, CEO of the aforementioned school. The last of the special prizes was awarded the St. Andrew the First-called Foundation grant to realize their project. Ms. Elizaveta Sarapova was awarded the prize by Dr. Vladimir Yakunin, Deputy Chairperson of the board of the St. Andrew the First-called Foundation for her project which aims to help young disabled people develop their soft skills and eventually gain employment. ff

The promoting and special prizes were followed by the announcement of the three main winners of the projects competition. In third place, winning a one-year master’s or bachelor’s scholarship at the Anglo American University in Prague was Ms. Nadia Khan for her project which focussed on providing additional mental healthcare services and advice to young men in the United Kingdom. In second place, winning a full master’s scholarship at the Zagreb School of Business in Croatia were Ms. Joi Sears and Mr. Alexander Shelton for their project entitled “The Green Store” – a pop-up shop offering environmentally friendly clothing and accessories in addition to educational events on sustainability and conservation. The clear winner, however, receiving the vast majority of votes was Ms. Aurelia Abena Attipoe who travelled all the way from Ghana to present her project, “The Pitch Hub” – a training program aimed at equipping 50 young Ghanaian social entrepreneurs with the soft skills and platform required to build and sustain their businesses. For her fantastic efforts, Ms. Attipoe was awarded with Youth Time’s Idea Grant in order to realize her project.

The event was capped off with a swashbuckling desert safari during the afternoon which included a range of activities from sandboarding to quad biking, henna painting to dune bashing. All participants would then gather together for a traditional Bedouin dinner whilst enjoying various cultural performances including a traditional belly dance and a moment to remember from Youth Time International Movement ambassador, Qendrim Behluli.

Cultural performance during the Bedouin dinner

The general consensus was that participants and experts alike left the Youth Global Forum in Dubai with heads full of newfound knowledge and ideas. The lessons learned during the programme gave inspiration and motivation to all who attended, with participants gaining a new insight and understanding as what it means to be an ethical entrepreneur in modern society. As has become tradition since the very first Youth Time International Movement event which was held in Rhodes back in 2010, participants also jetted out from Dubai having made plenty of new friends and a sense of belonging to the ever-expanding Youth Time family.

Follow Youth Time International Movement and Youth Time Magazine websites for more updates on future events and activities and do not miss your chance to participate in one of them.