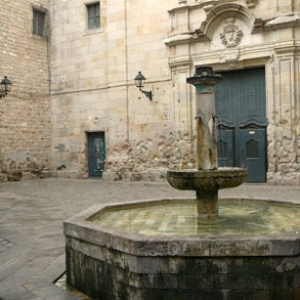 Youth Time is organizing Youth Time Global Forum, a unique major event that will bring together over 100 participants from all over the world to interact in a supportive and creative environment and work together to find innovative solutions to their most urgent challenges. This exciting event will take place in one of the most attractive Mediterranean cities: Barcelona! Whether you’re joining us there at the Global Forum or planning to visit this marvellous city during your next trip, we would like to share with you 5 secret hidden places with hundreds of years of history that not every tourist knows. Here is Youth Time’s selection of the most special unknown historic sites of Barcelona.

Built during the Spanish Civil War, Refugi 307 is a set of tunnels that served as underground bomb shelters to protect civilians when the city was under attack. The 400-meter-long tunnels were excavated by the population of the Poble Sec district and they could hold nearly 2000 people during the Civil War.

Refugi 307 is a unique reminder of the dark times that Spain was going through and is a true memorial to the people’s struggle to defend their city and keep their families safe during the war.

Designed by Italian architect Antonio Ginesi, this place is more than just a cemetery, it is also a work of art. This exceptional cemetery was the first to be built outside the city walls. founded in 1775 and rebuilt in 1891, Poblenou Cemetery is the home of many magnificent sculptures such as the famous “Kiss of Death”, designed by Joan Fontbernat. In order to learn more about its history, there are free guided tours that give the visitors a deeper view of the sculptures, the architects who designed them and the different periods of time during which they were made.

If you really are looking for something different to do in Barcelona and at the same time learn about the city’s history in a unique way, you need to visit Montjuïc Cemetery. Located on Montjuïc hill (after which the cemetery was named) in the southwest part of the city, it is Barcelona’s biggest cemetery. It was inaugurated in 1883 and it contains numerous artworks particularly in the Catalan Modernist and Art Nouveau style. This place is a real treasure of funerary art and the resting place of endless human stories. You can join a free guided tour to visit Montjuïc Cemetery and get a glimpse of the 19th century in Barcelona.

One of the least visited monuments in Barcelona, with a lot of history, art and peacefulness! This beautiful Gothic Monastery was founded in 1327 by Queen Elisenda de Montcada and it contains many rooms full of remarkable modern works and art collections grouped around a three-story cloister.

The Monastery of Pedralbes is a perfect sanctuary for those who want to escape the hustle and bustle of the city centre of Barcelona. The entry tickets cost around 4 euros and the visit is for free on the first Sunday of each month.

This place is one of Barcelona’s magical hidden squares. Visiting this square, you will probably see a group of children laughing and playing football around the fountain. The baroque church which was built on the square in 1752 tells a lot about the tragic past of this tiny place in the heart of Barcelona’s Gothic Quarter. The holes in the walls and the disfigured façade of the church still tell the story of the many bombardments that took place during the Civil War. San Felip Neri Square is definitely one of Barcelona’s most special hidden gems that should not be missed.