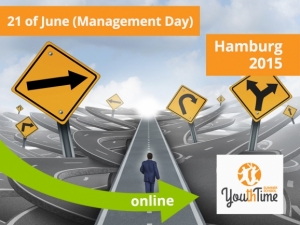 Updates, news, and insights from day four (21th of June) of the Youth Time Summer School 2015 in Hamburg.

The fourth and the last day of YTSummer 2015 was focus on practicing of all skills and experiences that participants have learned in previous days.

Mr. Stepanov started the session with a few outdoor exercises engaging participants in physical activities to refresh their minds and prepare them for the following activities.

The participants were divided into two different groups. Then the game started with a speech given by Mr. Stepanov, who acted as the UN Secretary General Ban Ki Moon.

The concept was to create two different new worlds by each group, that are able to sustain life in 2030 and cope with the new global challenges. The participants in each group had the chance to negotiate and exchange ideas on how to make decisions in regard to their newly-created world.

Afterwards, each group presented the world that they managed to create and tried to convince the audience and explain to them their rules, their regulations and their main principles.

Both groups chose Esperanto as their common universal language, a way to break language barriers and unite people. One group suggested to live in one global country in order to avoid political conflicts, immigration problems and geographical divisions.

Each group was able to combine innovation, concepts of universalism and common human values to create a better world for all people. Ideas were different, but there was one shared ultimate goal: harmony.

The second part of the game started by another speech delivered by Mr. Stepanov (Secretary General Ban Ki Moon) to the participants (world leaders). The speech consisted of a warning about a rapidly-moving meteor twice the size of the meteor that killed the dinosaurs millions of years ago, entering the Earth atmosphere.

The speech also contained information about a Vessel that would save a limited number of people after the meteor strike, in order to save humanity and avoid human extinction.

The exercise consisted of a collaborative negotiation to select eleven people to get on the Vessel and be saved, thus saving humanity. Both groups had to find a consensus and finally choose the six people to be left behind and vanish with the rest of the world.

The groups finally decided which people to get on the Vessel and which to stay behind. Then there was a feedback discussion with the moderators. They had the chance to discuss the decisions they made and the reasons why they made them.

The second part of the session was the “Risk Game” which was initiated by another speech given by Mr. Stepanov (Secretary General Ban Ki Moon). It was an interesting discussion among participants about negotiating the terms of returning to Earth from the Vessel and defining themselves according to the new life they are getting back on Earth after the meteor changed its orbit. Then each participant had to introduce their “new selves” and mingle in a newly-created network followed by a group feedback discussion with Mr. Stepanov.

The main goal of “Noah’s Ark Game” and the “Risk Game” was to train the participants and equip them with communication and decision-making skills especially in situations of pressure, stress and chaos. The participants developed their knowledge on collaboration, team-building, personal growth and self-acceptance.

The second part of the day was dedicated to the topic of socio-economical risks in modern society. Speaker: one of the world’s leading experts on central banks prof.Richard Werner. We’re going to publish the interview with Mr. Werner next week.

On that Youth Time Summer School 2015 is over.

Thank you very much for following our updates.