Youth International Summer School 2015 in Hamburg: Day One as it Happened 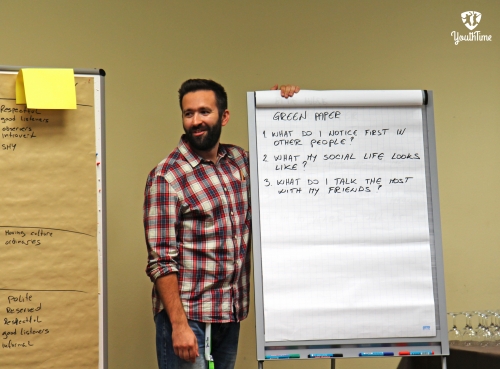 Updates, news, and insights from day one (19th of June) of the great youth adventure organized by Youth Time International Movement in Hamburg.

The third workshop was devoted to the topic of Daily Diplomacy.


Mr. Psarrakis is a very experienced expert and an economic policy advisor in the EU. He

made his workshop on Daily Diplomacy as more practical as it is possible.

He started the workshop with this statement “Many wars started because of diplomatic engagement. That is the reason why by using diplomacy we can bring change. In our world you don’t have to have an appointment with the government to act diplomatically and make a change. But one tool is needed – the tool of daily diplomacy.”


How to use this tool?

According to Mr. Psarrakis, it is important to follow several very important tips.

The daily diplomacy is the everyday quest of legitimacy, credibility, and reputation.

Therefore it is necessary to:

Here it is necessary to translate value and understanding of the process into action. It is also necessary to take into consideration the fact that any narrative has to addressed through one’s own values. Otherwise the message will never be actually received.

As an example, Mr. Psarrakis says that he receives over 300 emails every day, most of which are deleted without even being checked, because he’s working 12 hours a day and can’t work more than that. That is why one has to think about the message to be delivered and how.

When you speak, the information you deliver has to have an authoritative quality.

“You cannot be an expert in everything.” Says Mr. Psarrakis. “It is better to choose one specific field and focus on it. That’s when I will pay attention to you, because you would know the topic better than anyone else and would be able to extend my view on it.”

The person sending the message has to be reliable. Reputation is about a function of maximizing confidence, motivation and commitment.

“What we said yesterday and what we did yesterday affects the reliability of what we say and do today. You can fool people only once” Says Mr. Psarrakis.

In order to succeed in the globalized environment you need to use the following formula:

You might wonder what makes the power smart here, your engagement! So try to be as engaged and responsible as possible.

The second part of the workshop was related to EU resolutions in regard to Boko Haram attacks in Nigeria. Participants discussed and proposed amendments to a motion of a resolution of the EU Parliament and had the chance to implement them as a practice of daily diplomacy.

François de Calliéres, The Art of Negotiating with Sovereign Princes


According to Adi, the most important thing to do in order to break stereotypes is to learn how to observe and to interpret. Observing and interpreting cultural aspects, norms, behaviors and attitudes can be an effective way to avoid prejudicial ideas and judgements.

The first thing the participants did was getting to know each other and then conduct some interactive activities.

Brainstorming about prejudice and judgment

Each participant had to talk to someone they haven’t talked to before. Based on some information that the participants tell to each other, they try to produce an image about each other’s origins, nationalities and cultures.

At times, exchanging information might be the easiest and the fastest way to come up with an image that best qualifies people we’re dealing with, at least according to us.

Adi asked the participants if they had any examples of situations where they had to deal with prejudice gave a start to almost a 30-minute discussion. There were a lot of appropriate examples from almost all of the participants. Such as “Gypsies are dangerous”, “Russians are rough”, “Polish people are always drunk”, “Wrong religious perceptions”.

In real life it is essential to receive information from other people, instead of judging and interpreting what you see which leads to creating stereotypes.

It is important to try to think about it, try to understand what information you are trying to deliver to people if you’re not taking enough time to think. “Relevant examples of stereotypical thinking are our names. After we introduce ourselves, people immediately tend to identify us, guess our nationality and even associate us with different groups. However, that doesn’t work all the time. I’m Adi. And my name sounds more like a nickname”.

The Onion of Personality

Visualise on onion. An onion has layers and these layers represent your personality. All people have several identities that can develop, be influenced and change according to the environment.

The point of the Onion Game is to try to identify yourself answering different questions categorised in three different colors; red, blue and yellow.


It is important to try to discover what we think we know about others, because that encourages us to start thinking.

We tend to produce stereotypes and judge others not only according to the pieces of information that are being circulated between us, but also based on the rules and norms of a given society, because our own rules never seem strange or intriguing.

The following task was to comment on someone’s personality in the group.


Here are what people felt after the task

“It was difficult not to start to judge.”

“We can’t be objective with ourselves as someone else could be. Sometimes self acceptance is a hard thing to do. So it was interesting to hear a third-side opinion.»

“I felt it was complicated. We need time to think before making some conclusions about anybody.”

Stereotypes are natural. We have always been producing them, and we will continue to do so. Inspiring and insightful workshops like the one given by Mr. Adi Kolasevic assist us in being more responsible, ready to dissociate with at least some the stereotypes we have been producing or receiving through time.

The study program of the School began with Master class: Decision Making Under Pressure.

Mrs. Loose started her master class with a 2-minute music therapy session. When we close our eyes we see different pictures. Why is that happening? Because we are individuals and we all have our own experiences, the core point is to understand ourselves.

Based on the knowledge we develop about ourselves, we get to set our true goals. “The goal is to make a lot of goals, and that is the reason why it is important to try to make decisions under pressure, as it helps me know more about myself, my goals, values and strengths.”


Self-understanding is the key point: What are my abilities? What do I stand for? What is important to me? What are my values? What do I like to do?… While questioning themselves, participants try to answer these enquiries in order to establish a more solid knowledge about themselves as individuals.

“You have to be honest to yourselves about your values and pay attention to them. Says Mrs. Loose during the workshop “your basic values are determined in the first five to ten years of your life.”

Values are motives for a better life. They support each other and interact in a way that helps individuals live in line with what they believe in.


Participants then had to discuss their choices in peers, exchange their ideas and go deeply through the hierarchy of their choices. They get to discover what makes them who they are and understand how their values intertwine to build their personalities.

Inspired from what Mrs. Loose said, participants draw their vision of themselves in ten years.


They draw the most important thing they see in their lives, where they see themselves in ten years, and how would they interact with the world at that time. They close their eyes and imagine. The goal of the activity is to take the chance to draw things down that oftentimes are difficult to think about and explain.

Practical tips to better develop yourself:

Take the chance to say YES

The key point to better understand yourself is to know your values. It will help you connect to who you actually are and make decisions based on that.

Networking is a real catalyst for self-awareness and for establishing our perception and perspective of the world around us.

We would like to thank Ala Oueslati for his assistance in preparing this blog.