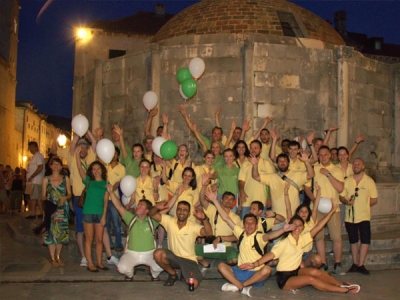 The ancient streets of the Croatian city of Dubrovnik are famous, but the primary reason is no longer the acclaimed television series Game of Thrones, which was shot there. From now on, the whole Dubrovnik area, within a radius of ten kilometers or even more, will be filled with the positive energy of forty enthusiastic young people from all over the globe, thanks to the traditional Youth Time summer school, which was held in Dubrovnik from the 21st to the 25th of June.

Youth Time continues to train its activists by empowering them with the skills needed to create full-fledged social projects. An uninitiated person might think that the path leading from the initial concept of a project to its implementation must be long, difficult or even impossible; but YT experts, in addition to a structured theoretical framework, give young people a boost beyond theory, by making them believe that anything is possible, even the most audacious dreams.

Many of the participants, who are only in their early 20s, have already acquired important experience in the field, which is a big advantage in the activities at the summer school – an active exchange of knowledge and ideas, taken to another level by an international component.This time, the curriculum covered all possible work aspects of social projects: from the criteria for idea evaluation (which idea makes sense and which is meaningless or utopian) to competent project presentation to any type of audience, whether it is an audience that is indifferent to such things, or one that is sympathetic and interested. A step-by-step method for project implementation was provided to the attendees in three sections – Networking, Fundraising and Social Partnership. The legal technicalities of setting up NGOs (non-profit organizations), which are necessary in order to interact with partners and sponsors, were explained to the participants by Sergei Bashkov, Head of the Legal Department at the investment company Venture Investments & Yield Management. Furthermore, Vladimir Yakunin, who is not only our old friend and mentor, but also Doctor of Political Sciences and Professor at the Stockholm School of Economics, gave an overview lecture about the nature of NGOs, which, as usual, resulted in an active discussion touching many related topics.

After acquiring the necessary theoretical knowledge, young people were divided into 3 groups, each of which had a couple of hours to come up with a project and submit it to the jury. Despite the alluring lavender landscapes and tantalizing proximity of the sea, the groups worked so intensely that participants often missed coffee breaks, the lack of which they had complained about during the previous two days. All three projects proved to be not only original and interesting, but also well organized, with well-designed programs of activities and a substantiated list of potential partners and sponsors. The first prize was awarded to the third group, which produced a compelling theatrical performance during the presentation of their project.Of course, the organizers of the summer school could not let the participants limit themselves to training and brainstorming while spending five days in a place as beautiful as the Croatian coast. In addition to the learning process, the program included sports activities, time for informal communication, and an exciting treasure hunt through Dubrovnik’s Old Town, which ended in a stunning flash mob. Divided into two groups, the participants, helped by local guides, had a real journey through memorable places in the ancient fortress, looking for green balloons with markers, which eventually led them to the town square.

Lined up in an easily recognizable YT abbreviation, young people, to the applause of tourists and wedding processions, enthusiastically released into the sky dozens of balloons with the Youth Time logo and gave away the remaining ones to the local kids. Long after the flash mob, these white and green symbols of the movement, filled with the participants’ sincere and heartfelt emotions, could be seen floating in the starry Balkan sky.Unfortunately, the world is dominated by imperatives which divide people, because priorities are set in a way to favor private, individual and selfish needs and wishes. Therefore, all YT activities are focused on proving that an alternative approach is not only possible, but is also more efficient, regardless of how counter-intuitive this might sound. At all times, the members of the school were divided into teams, but their work didn’t show the slightest sign of competition, only cooperation and unity, despite the fact that they represented 21 countries from all over the world, from India to Argentina. This is due not only to the fact that during such events young people learn to find common ground by interacting with people from different cultural, religious, age and economic spaces. It is also not due to the fact that they get rid of self-doubt and of the fear of dreaming and realizing their dreams.

The main point of these meetings is to learn to grasp the essence of any human life and to contribute, by all means, to the happiness of others. From the very beginning, this idea was one of the foundations of the Youth Time movement and it is easy to agree with the fact, that if a building has a solid and reliable foundation, the whole structure can stand for many, many years. Evidence of this can be seen in the huge fortress in the old part of Dubrovnik, some parts of which are more than 6 centuries old.