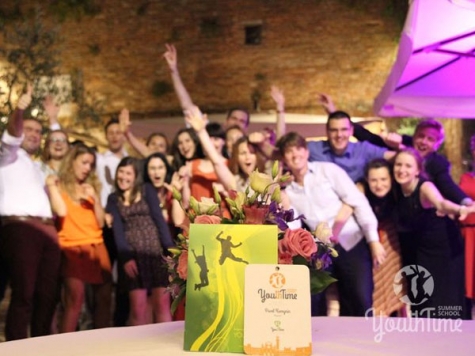 Youth Time Movement, the international non-governmental youth organization, had organized the 4th Summer School in the period from 19th to 23rd of June, 2014. The most active representatives of the European youth and participants of the Movement had an opportunity to attend the series of trainings and seminars. This time, the venue of the traditional event was the city of Siena in the Italian region of Tuscany. The subject of the Summer School was “Life. Job. Balance: Test/Taste your lifestyle”.

This year it coincides with the projects of the Youth Time Movement that were intended to support and develop the youth initiatives in Europe. Those initiatives concern, in particular, the non-formal education, development of the project network for young people, organization of the students’ meetings with reputable politicians and economists to exchange experiences and ideas. The course called “Life. Job. Balance” is becoming popular in many schools around the world. Oftentimes, it is the special support program for young professionals who require help and advice at the early stage of their careers. Summer School students also frequently face the problem of inefficient time management, irrational setting of life priorities, stresses caused by the busy work and study schedules. As the result, the goals and objectives that were far from the expected future come to the fore. That’s why the motto of the Summer School encourages young people to test and taste their lives.

Approximately 25 young students, authors of innovative projects and rookie professionals, listened to the lectures, delivered by the experts and trainers from around the world who volunteered to share their knowledge during the Summer School. Alexei Stepanov from Serbia, an executive director of the Center of Public Democracy Study, told about the public speaking skills; Sven Anger, the head of the “ANGER” company, who is the trainer and the consultant in the field of customer relations, revealed the basic secrets of the art of presentation. Ife Prendergast from Ireland, the representative of the faculty of humanitarian studies in Dublin Technical University, described the proper way to divide time between work and personal life. Ellen Pinchuk from the U.S., the head of the department of international projects in “Mikhailov and partners” company, media expert and former journalist, had shown the participants, during the practical exercises, effective interviewing techniques and gave some tips on how to properly hear and listen to the interlocutor.

Patricia Bolione, founder of the Italian art directors’ fund, in her turn, told about the creative approach in interpersonal relations with colleagues, clients and friends. Among the honorary guests of the Summer School 2014 were old and new friends of the Youth Time Movement – Farah Mohamed from Canada, social activist and founder of G(irls) project; Vladimir Yakunin, founder of the World Public Forum called “Dialogue of civilizations”; Hishab Sandile, an advisor to the rector of Anglo-American University in Prague. You can find more information about this event in the 24th issue of the Youth Time Magazine (August-September, 2014). Information about Summer School, feedbacks and citations of the participants and trainers are available on the Internet at the hash tag #YT Summer, and at the official website of the Movement – youth-time.org.

Youth Time Movement would like to express a special gratitude to our Italian friends, namely, the University of Siena, the University for Foreigners and the museum complex of Santa Maria della Scala for the warm welcome and support. We would also like to thank the city council and the organizational committee of “Siena 2019” that has been created prior to the contest for the title of European Capital of Culture.