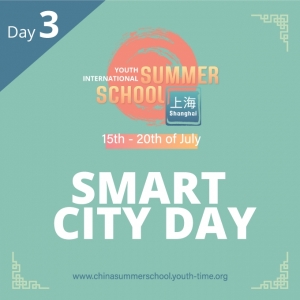 What does IT offer today’s urban citizens? A group of experts from around the world discussed this simple and at the same time very broadly focused question on Day Three of the Youth International Summer School, which is being held from the 15th to the 20th of July in the city of Shanghai. Read on to find out how Smart Technology is being implemented in modern urban areas and learn about the innovations that we can expect in the near future.

Discussion about perhaps the most debated and widely-followed topic related to Smart Revolution – Smart Cities and began with a master-class led by Ni Linda, founder of Mai Tan Consulting Limited. She has worked in the Chinese transportation industry for over 15 years and has witnessed the rise of smart technology in one of the most developed local industries. According to Ms. Ni, during the past 20 years Chinese high-speed rail and the urban environment have developed quickly, in many respects putting improvements in place that some countries will need the next 100 years to do. In 1995, only Beijing, Shanghai, and Tanjin had traditional subways.  Today, urban railway transit in China comprises 6 railway systems: metros, automatic people movers, trains, mono rails, maglevs and suspended monorails.

Also, during last four years, advanced technologies such as Artificial Intelligence and face recognition, now in use in the Chinese railway system, make the Chinese rail network one of the most innovative railways in the world. “Nowadays China‘s railway systems have their own standards, and our key technologies are based on domestic research and production», stated Ms. Ni.

To conclude, Ms. Ni asserted that local railway system plans for the next few years are quite ambitious – including a driverless train operation and a super speed train projected to achieve a maximum speed over 1000km/ h.

George Molokal, CEO of ALCOR Fund, continued the topic with some general rules about transforming cities into smart cities. Molokal brought up the example of Singapore and derived from the Singapore experience essential benchmarks for making a city truly smart:

Policy Framework and National government participation: what is the main sector in which the government plans to concentrate its efforts? The Singapore government started developing its framework plan in the year 2000. It defied the challenges it had to contend with, including the local weather conditions, and transformed Singapore into one of the smartest cities in the world.

Technology, systems and sensors integration: Singapore has integrated adaptable Technology and IOT (Internet of Things) to respond to urgent problems in education, telecommunications, and transportation. Social media and E-services are among the most integrated tech systems in Singapore, with the G-Cloud government cloud and Cube now in place as government-based platforms where local governments and local officers can share potential social issues and discuss their plausibility. On the other hand, the OBLS, which is business-oriented, was designed to make the investment process smoother and more efficient.

Community participation: Data.sov.gov as well as the Oneinbox E-services enable citizens to receive the most up-to-date information from the local government and authorities. In consideration of all that has been mentioned, “the social benefits of living in Singapore are ranked number one in the world,” says Mr.Molakal.

According to Molokal, many cities in the world are implementing the Singapore model and adapting it to local conditions, including Chicago and San Francisco (USA), Seoul (South Korea), New Delhi (India) and Santander (Spain). “It is not replication. It is looking at the model and adapting it to each city. Each city is unique, education, structure, demographics of the population are unique. So local entrepreneurs have to consider those factors. But the core principals are the same”, – explained Molokal.

Mark Bradbury, managing director of Vertical Thinking, raised the specific topic of smart agriculture, which can be integrated into an urban environment. He began by stating that “Smart is about looking backwards as much as it is about looking forwards”. So he proposed thinking about smart technology in agriculture beginning with the very root question “Where does our food come from, and why do we eat it?”  He claimed that people do not eat to get nutrients any more, people are eating more than they need to without getting nutrients. “We are a growing population that relies on other countries, so to get food modern cities need to start cultivating their own food”, he said. Mr. Bradbury mentioned the “Growing underground” project that is currently being implemented in London, UK. City bunkers that had not been used since the end of the Second World War have been converted into plants 33 meters underground.  With special lights and constant temperatures, vegetables grow there the whole year and ripen in 14 days instead of the 3 months required in a normal, above-ground environment. Bradbury emphasized that the food is not exposed to any random weather changes, which is quite an issue for the UK. “It is relatively simple technology, but it is the way it’s been combined. A lot of innovation is taking stuff that is already here, but in different ways or in different combinations, and that’s what we have done. We found a place which was unused and cheap, which was warm, then used a technology to make the plants”, – emphasized Bradbury.

With the Smart Cities topic, the study program of the Summer School in Shanghai is concluded. Stay with us to keep up with the latest updates from other Youth Time events.