From Institutions to Technology 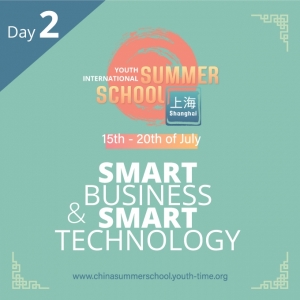 Could governments be replaced by governance the same way that currency could be replaced by crypto? Are we already on the way from insitutions to technology? How might those changes benefit business, and what should be considered as a potential threat? These are the questions that were discussed on Day Two of the Youth International Summer School that is being held from the 15th to the 20th of July in the city of Shanghai. Read on to find out how Smart Technology integrates with business today.

Li Guoneng, professor of Science and Technology at Zhejiang Univeristy, opened our consideration of this topic with apresentation on Smart Energy.  He pointed out that the interconnection of business and technology has already brought significant results in the development of both the commercial and the public sectors in China. “Basically, developments in software allow us to connect many things together, collecting data and making more effective decisions based on the complex analysis of those data. For example, we have had a big issue with traffic management in Chinese megacities. Today we have automated and synchronized traffic lights based on the Internet of Things, and traffic conditions are becoming much better, people can feel it”, explained Mr. Li.

The expert sees the increasing efficiency of solar power generation as one of the most important fields for future investment and development. Mr. Li is convinced that there are tools available now for research and further implementation of smart technologies in solar energy. “The main source of our energy is the sun, if we learn to use it effectively, then the energy problem can be solved. I think that within five years, it can be solved”, he concluded.

After wide-ranging discussion, the program at the Summer School continued with broader Blockchain Technology. Mohammad Shaheed Khan, a board member at the Harvard Business School Club, emphasized that there are a lot of myths surrounding blockchain. Some think that blockchain is an equivalent of bitcoin, others that this technology can be used by financial people only. His main aim was to demystify those myths by telling participants how blockchain can be used as a service and embraced by governments and companies. To illustrate the difference between, for example, traditional and smart financial systems, Mr. Khan pointed out that it takes four hours to go from Dubai to Oman by car, and it takes at least two days to transfer money from Dubai to Oman using a traditional bank transaction. “In blockchain you remove the need for intermediaries and trust in one another and have it as a source of truth. The technology is hack proof, cyber proof and much faster than any of the alternatives. Of course there is permissioned and permissionless blockchain. For crypto transactions, moving money from one party to another is decentralized, so bitcoin doesn’t need an entity to control it. But for record keeping you still need a master record keeper like a government or a company that says yes, the transaction actually happened”, explained the expert.

According to Mr. Khan, blockchain is not a revolutionary technology, but a foundational technology upon which things are going to be built. It is not, however, an overnight sensation that is going to change things immediately. But quite soon, big differences in terms of efficiency, costs, ease of doing business, and so forth will be seen. “For example, in Dubai local governments are giving themselves a target date of 2020 when the entire government will be entirely on blockchain. Identity can go through blockchain, as well as vehicle records, records of land registration, supply chain management, and the medical sphere”, said the expert.

In the next session,the issue of Smart Revolution was raised to the level of a theoretical framework by Rob van Kranenburg, founder of the Internet of Things Council. He started his master-class on The Role of Big Data and IoT in Smart Cities with a reference to Italian philosopher Antonio Gramsci, who back in the ‘30s of the last century forumlated the theory of cultural hegemony, according to which one needs to have cultural institutions in order to have political hegemony. Nowadays, thinks van Kranenburg, this logic has shifted towards technology. «It is not anymore about culture,  but about technology. Technological agency is what you need to maintain power. This shift is not only positive, there is also some loss there», he stated.

The shift is related to software mainly.  According to van Kranenburg, it is what people somehow lose control over. He stressed that in most places across the globe,just a few big corporations and governments are making decisions based on this process, but the publicmust struggle for its right to be involved.  «And this is exactly the moment when humans feel that they are losing full control over the environment. Because this is no longer mechanical (you see what you get, you get what you see), there is some kind of intelligence that may run in the systems, and we can’t really control it or can’t really know what it is. Before our systems go semi-autonomous or autonomous, this has to be negotiated with a lot of stakeholders. We have to have a clear understanding that this is the moment when humans may have to share decision-making with machines», explained van Kranenburg.

As to future developments,according to van Kranenburg there are three possible scenarios:

«In China, for example, the government as engineers have basically turned politics into  engineering and architecturing of the systems, clouds and platforms and have created a kind of intranet in which all the data stay within this intranet and the value of that data is enhanced, enriched within clouds and platforms that are in Chinese hands and then pay back to people where people pay taxes», that is how the expert explained the third option.

According to van Kranenburg, this third option is what should be technologically implemented in Europe. «Basically we want to create a 5 million zone in which data of 5 million European citizens are being hosted in our own clouds, our own platforms and are not only in thehands of big corporations such as Google, Amazon, Facebook and Apple as they are now. This is a very dangerous situation in which zones lose agency and they need to get this agency back. In Europe we are in a position where we need to find ways to get that agency back», concluded the founder of the Internet of Things Council.

The last session of the Summer School’s second day broughtparticipants back to smart technologies in business. A case study on Utilizing Innovation Labs, Startup Incubators and Accelerators for Entrepreneurial Successwas moderated by Dr. Oualid Ali, Founder and president of the Future Cities Council. He started his session with the claim that humanity today is living in the fourth industrial revolution, which is shaped by technology. As futuristic as this seems, there are many challenges to deal with. According to Dr.Oualid, by the year 2050, 75% of the world’s population will be living in cities – “the 21st century is the century of cities”, he asserts. Some of the challenges that we will have to deal with in the future are very basic: energy consumption will increase, meaning that there will be more CO2 in the air that will lead to serious health problems, and robots will have a monopoly on most of the jobs. Yet if there’s one thing that robots cannot do, that would be innovation. “Robots cannot innovate”, says Dr. Oualid Ali.

From this point of view, individuals who wish to be successful in this age will have to be technically innovative, will have to come up with tech solutions to problems and will have to build tech startups like Airbnb or Uber. «Most successful startups are now built on technology», claims Ali.

He admitted that there is currently a big gap between opportunities in cities and villages, as most of the eco systems of startups, incubators, and accelerators are based in big cities. However,he pointed out that lately a few virtual accelerators have emerged, so entrepreneurs basically can be based wherever they like. «You can just go online and get all the supportyou need. They get you connected to venture capital online. So I think, this a virtual accelerationandincubation startup ecosystem which is online and which will establisha lot of equality between villages and cities, and will reduce this gap», he concluded.

The program of the Summer School in Shanghai will continue over the next day with a deeper analysis of the Smart Cities narrative. Stay with us to keep up with the latest updates from one of Youth Time’s major events of the year.