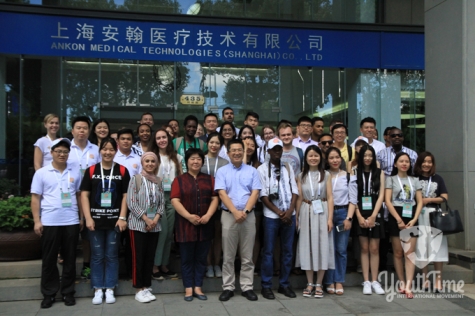 From July 15th – 20th, Youth Time International Movement in collaboration with the China Soong Ching Ling Foundation hosted its eighth Youth International Summer School. This was to be the third event of its kind held in China. While the previous two had taken place in the capital, Beijing, the destination of choice this time around was one of the world’s most populated city and technologically advanced hub of Shanghai. As has become customary at Youth Time events, participants and experts from different countries, cultures and backgrounds travelled from all over the world to attend. A rich variety of keynotes, masterclasses, case studies and workshops took place, all centered on the event theme, “The Smart Revolution: the Interconnection between City and Society.”

The evening of Sunday 15th July marked the opening of the Youth International Summer School. Following official registration for the event and enjoying a jovial ice-breaking games session facilitated by Youth Time Ambassadors, participants who had journeyed from all corners of the globe sported traditional clothing as they joined together at the official welcome reception. As participants fragmented into smaller groups, they gathered around the Lazy Suzans and feasted upon local cuisine whilst enjoying a range of musical performances.

On the following morning, the formal activities commenced. The day was entitled, “Smart Society Day” and began with the official opening ceremony, moderated by Ms. Yin Lee and Youth Time Ambassador, Mr. Mohammad Shaheed Khan. The ceremony included a number of speeches including those made by the leaders of both organizing partners, Ms. Julia Kinash , President of Youth Time International Movement and Mr. Hang Yuanxiang, Executive Deputy Chairman of China Soong Ching Ling Foundation. During her opening speech, Ms. Julia Kinash chose to take the opportunity to define the purpose of the event by stating, “While the Summer School aims to provide participants with new information and ideas related to areas including smart infrastructure, transport and technology, it has also been strategically composed to encourage them to consider the importance of a smart society.” She continued by posing the question to all attendees, “Increased urbanization requires many technological innovations, but what about social innovations?” Her message was that for a city to be considered truly smart, it must begin with the evolution of its citizens.

After an inspiring start, the working component of the program began with Dr. Vladimir Yakunin’s interactive masterclass on the topic, “The Evolution of Education in the Time of Smart Development”. Participants discussed the different types of learning techniques in the present day whilst also considering the importance of understanding people from different cultures in order to find solutions to the global challenges that face humanity.

Dr. Yakunin’s session was followed up by local expert Mr. Chen Zongnian who presented on the topic, “Innovation: Theme of the Times for Global Youth”. During his presentation, he discussed the importance of creativity as a characteristic for young people during the technological revolution.

In the afternoon, the first round of workshops took place. Youth Time expert and long-term friend of the organization Mr. Sven Anger presented on his topic, “The Ecology of Smart Leadership” whilst local expert, Mr. Cheng Weidong went into greater detail on the smart society topic with his workshop on, “Diversity and a Community of Shared Future for Mankind”.

With participants feeling a little fatigued from a combination of jetlag, a long day’s work and the oppressive Shanghai summer heat, the day was capped off with an energizing game conducted by Dr. Hrishabh Sandilya. The interactive session was designed to encourage participants to consider and discuss which values are necessary for a successful smart society.

The game on smart values seemingly gave the participants a much needed energy boost, as that evening they headed out into downtown Shanghai to explore a little more of the Chinese culture.

The following day’s programme was focused on smart business and technology. A combination of interactive masterclasses and workshops took place which included trending topics such as smart energy, demystifying blockchain technology, and the role of big data and IoT in smart cities. The final part of the working programme took place in the form of a case study, whereby Youth Time expert, Dr. Oualid Ali presented on the topic, “Utilizing Innovation Labs, Startup Incubators and Accelerators for Entrepreneurial Success.”

The day’s events were concluded with yet another cultural excursion; This time to the theatre to observe an acrobatic show. Already serving as moderator, expert, and Youth Time ambassador at the Youth International Summer School, Mr. Mohammad Shaheed Khan had already established himself as a seasoned “Jack-of-all-trades”, but it was his contribution during the acrobatic show that impressed more than any other. During the spectacle, a knife-throwing routine took place with a member of the audience later asked to volunteer as the assistant who would be put in the line of fire. Mr. Khan wasted no time in putting himself forward and raced toward the stage quicker than a greyhound. True to form, he had the audience rolling with laughter during the performance and completely stole the show!

The final day of the working programme centered on the infrastructure that makes up smart cities. Topics of the masterclasses and workshops included climate smart agriculture and urban farming, smart transportation and autonomous vehicles, intellectual design, and smart cities vs smart villages to name a few.

As the formal part of the International Summer School drew toward a close, the day was completed with a concluding session. Both local and international participants conducted speeches expressing their thoughts about lessons learned during the event before Ms. Julia Kinash, President of Youth Time International Movement and Madame Song Jian, Deputy Director of the China Soong Ching Ling Foundation Department of International Cooperation and Exchange made their concluding remarks. Further, each expert was also awarded gifts as tokens of appreciation from both organizing parties during the ceremony.

On the final day of the programme, participants rose early and jumped on busses headed for theInternational Peace Maternity & Child Health Hospital of China Welfare Institute where they gained insight as to the general running of a smart hospital. They then headed for lunch at the Sea Palace Floating restaurant before venturing on to the Zhangjiang National Innovation Demonstration Zone. Here, they would learn more about the efforts being made to develop an innovation and entrepreneurial ecosystem, emerging industries, talented people from around the world, and reform policies.

Finally, the event was capped-off in style as all attendees joined together for the official gala dinner which took place on a spectacular river cruiser on the Huangpu River. The event began with leaders from the partnering organizations expressing their thanks to one another and all that had helped make the event possible. The group would then dine in style in front of a live jazz band as the boat made its way along the river with Shanghai’s standout landmark, the Bund lighting up the night sky.

The International Summer School in Shanghai set out to inspire and educate young people from all over the world about the importance of smart cities and societies during the time of increased urbanization whilst also creating and environment for them to establish new friends and partnerships. In their mission, Youth Time International Movement and the China Soong Ching Ling Foundation duly delivered and it is now up to the participants to take up their civil responsibility of initiating positive change within their communities.