Education for the Educated 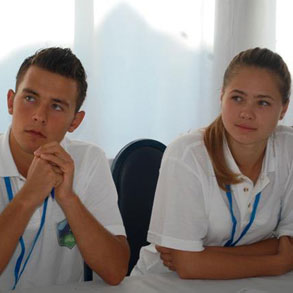 «Education for the educated – is like the second sun.»

We can not disagree with this dictum of the great ancient Greek philosopher Heraclitus of Ephesus. Today, with only knowledge of English You can not surprise anybody, and to achieve real heights we often have to cross through some difficulties, related primarily to the fact what kind of education we get at home, at our Schools and at the University. Talking about all these kinds of education, We would like focus on the last one.

“What is the ideal system of education? It is no secret that today, in the 21 century, with the development of information systems and high technology, the advent of distance learning opportunities, learning much easier and more interesting. However, it is impossible to assert with confidence that the quality of the education is always on top. To date, there are several internationally recognized systems (or models) of school and university education: American model (using the «higher schools and classes» (which, incidentally, not without success, adopted by a lot of the Armenian teachers), where pupils and students can learn what, in fact, they want to), the European system (by which we mean the Bologna system of education today with an unusual scale of “one hundred” estimation and overall cumulative rating) and, of course,   widely known for all of us,  the Soviet (or post-Soviet) model of education.

The American model, at first glance, seems the most attractive and interesting for students. There does not need a lot of work, training is extensive in nature, and the students, if you take on the whole, can choose the subjects, that they wish to explore. A paradise for any student, isn’t it? However, as a productive and useful, is this model can be desirable? Of course, it is very hard to answer to this question affirmatively, as historical experience shows that with the end of the 80th of the last century, Americans began to gain experience quickly (it can seems oddly enough) from Soviet education, giving him a greater preference than their own. And also trying to sell their education system to the rest of the world as a “brand product”. In favor of this assertion is the fact that despite a number of other factors, it was in America, that since the end of the 90th it began a broad campaign to attract foreign, mainly of Soviet specialists to the Soviet education, in their country. From this point of view, it can be quite logical conclusion that if a country can create its own system of education, it seeks to entice any means at its side speakers of other forms of education, more successful in this regard, from the other country, giving them their own less quality system. From this perspective, attempts by many post-Soviet countries grossly inefficient to copy the American system of education in the 90th years, completely rejecting the experience and practices of the Soviet period, seem simply absurd. In addition, the American (and Western including) education system can not boast the release widely skilled professionals, meanwhile it can not be said about the Soviet scientists.

Of course, speaking about the Soviet education system, it is impossible to approach its one-sided. In every coin has two sides, and the Soviet system (partly taken over by us, partly rejected and partly forgotten) were present both positive and negative sides. Student could not learn the whole year, but was obliged to come to the final exam well prepared. However, the quality of education and professionalism of teachers (even teaching that would benefit the party leaders and officially prevailed at the time of the Soviet communist ideology) did not cause any issues, as evidenced by the above-mentioned facts about the involvement of soviet professionals in America. Just today, in the predominantly Russian reality began intense debate on the return of the hastily-taken over by the old Soviet system of education. And although the Soviet education was largely idealized and politicized the existing system, but its experience should not be underestimated.

The alternative to all the previous evaluation system, cumulative credit-rating program of certification, to get students throughout the school year, each month, prepare well enough, extensive form of education in conjunction with intensive practice of synthesis already time-tested methods with new IT (multiple choice), with respect to easy, accessible system of education — all this makes this model a certain «golden mean» and led many countries (Russia, Armenia, some post-Soviet countries in particular) to adopt it, putting on an existing one. This model of education has been successfully used in our Russian-Armenian (Slavonic) University for several years. Students have an incentive to learning, the desire to acquire new knowledge, and teachers have in many cases can not be judged bias in estimation, because the work of students is checked by computers.

Of course, there is no limit to perfection and the ideal model may exist only as an abstract symbol, a standard that you want to pursue. In this respect, we think that the Bologna system of education — one of the best and most reasonable, both for educators, teachers and for students. However, it is important at this constant upgrading to keep in mind that the historical legacy that we left our parents and ancestors. It is important to combine the historical experience of modern ideas and innovations and develop the education system is not in qualitative sense, but in quantitative, to modernize and preserve the best of both. It is no accident that a prominent politician and statesman, Otto von Bismarck in his famous speech said that «the wars are won not on the battlefield and not by commanders and generals — wars are won by the parish priests and teachers»