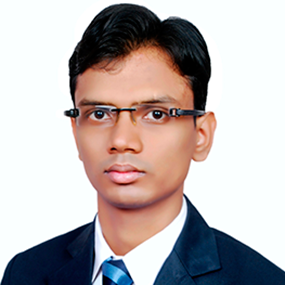 Naveen is a youth mentor, a full-time mechanical engineer, and a young social leader. He has worked with many multinational companies in India and the UAE. He has published a technical paper on sustainable mass transit design, and has designed an original new mass transit system. Apart from his full-time job, he volunteers for many international NGOs, working in the fields of education, energy, and sustainable development. He is a founder and director of the „Vijaydeep Foundation: NGO in Varanasi, working to provide quality education, sustainable energy, and preventive healthcare. He has participated as a speaker, presenter, and delegate at many international and national conferences including the United Nations, the Commonwealth, etc.

An author, speaker, International Peace Advocate, and International Election Observer, and a widely traveled Youth Empowerment professional.
Hussaini graduated from the National Institute of Business Management in Chennai, India with an MBA in Production Management. Currently he works as a Head of Editorial Production at Media Trust Nigeria Limited – publisher of the Daily Trust, the Weekly Trust, the Sunday Trust, and the Kilimanjaro and Aminiya Newspapers.

Hussaini has been named International Youth Advocate of the Year by the West African Students‘ Union in East Africa. He was also appointed Local Coordinator for African Students for Liberty in 2017 and has recently been appointed Kano State Ambassador for the Youth Development Centre at the Olusegun Obasanjo Presidential Library in Abeokuta, Ogun State, Nigeria to campaign for Irregular Migration, #The Abroad Campaign.

Eric has been a practicing medical doctor for 10 years now, working ath one of the leading health facilities in Africa. In addition to being a successful medical doctor, he has been passionately engaged with his responsibilities as a public speaker, persuasive writer, disruptive thinker, talent manager, and life coach. As an increasingly prominent, charismatic speaker, he has appeared in high schools, universities, youth forums, churches, corporate organisations, and training establishments to address highly inspirational and important topics including ‘Talentpreneurship’, ‘Thinkingcraft’ and ‘Blue Ocean Ethical Leadership’. He has positively influenced and mentored multiple young adults who are showing great promise for pacesetting exploits. Eric has won laurels in his academic field, the medical profession, and has been a gifted contributor to various causes. He is a member of several prestigious organisations including the World Council for Gifted and Talented Children, Kentucky, USA; and has attended several national and international conferences/summits. He has written several inspiring articles and is currently working on two books, to be published soon. Eric is involved in several creative projects including app/software development.

Hayet is a 25-year-old teacher of English at Evocenter.us, a leading school in English instruction in Batna city in Algeria. Hayet is also active in two other fields, which are architecture and law. Despite these professional qualifications, Hayet has chosen to follow her passion: English. Hayet is interested in intercultural dialogue and innovative teaching. She is also a poet and is very active in the domain of social entrepreunership and youth empowerment. She is the founder and Leader of the EFE Club, which has been recognized as the most active Club at Setif University; she has represented Algeriaat the Global Youth Forum (Spain 2015); she has hosted a program devoted uniquely to English at the Batna Radio station; and has been named best delegate at ECOSOC AMUN 2016, in addition to many other endeavors.Hayet adheres to theYouthTime motto “Be the change that you wish to see in the world”.

Liu Zhe, graduated from the University of the West of Scotland in 2013 with a bachelor’s degree in human resources management. Also, he is chairman of Beijing HongShengJiaDe technology co., LTD. and founder and CEO of the PaoPao buddy brand. During his student years, he was the president of the Chinese students and scholars association at the University of the West of Scotland and was given special recognition by the education department of the British Embassy in the People’s Republic of China. After returning to China, he founded the Chinese innovation brand called “PaoPao buddy”. This is a modern technology enterprise which integrates production, sales, and service, advocating a green and efficient life philosophy. He has applied for more than 20 Chinese patents for his products.

Tafaol is an environmental activist and peace advocate and is a founder of a civil society organization that focuses on water sanitation and poverty alleviation in an attempt to improve the quality of life in Sudan. She holds a BSc. in Business Administration and Management. She volunteers for numerous community activist organizations, in particular those related to the environment and vulnerable groups. She is currently a Volunteer at Cousteau UNESCO-Ecotechnie and aims to pursue an environmental consultancy career. She aspires to influence positively the status of development in Sudan and Africa. Moreover she is into fashion, beauty, travel, and art.

Mohammad is a fintech enthusiast and advisor with over 17 years of achievement in the banking and finance sector. He is a serial entrepreneur, having launched businesses in multiple fields. Currently he spearheads the penetration of Islamic Banking services at a foreign bank in Bahrain. He is also the Vice Chairman of the Bahrain Association of Banks and the Islamic Banking Committee and is an advisor to the World Congress of Muslim Philanthropists. He advises a number of blockchain initiatives. He attended the Massachusetts Institute of Technology’s Fintech program and is a graduate of the Harvard Business School. He is the President (Bahrain) and Board member of the Harvard Business School Club of GCC. Mohammad has been ranked as one of the 500 most influential members of the global Islamic economy.