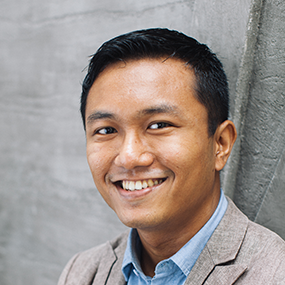 Niwa was an NGO activist who now works as a diplomat for the Indonesian government—Aspiring to make little difference from within the system. What consistently remains is his interest in youth leadership and diplomacy, project management, policy advocacy and facilitating international trainings. He graduated as a valedictorian from University of Indonesia, minoring in International Relations and subsequently the best graduate of Diplomatic Academy batch 39 in Indonesian Diplomatic Corps. As a co-founder of an Indonesian youth NGO (since 2009), Niwa has successfully won project grants and led several community projects funded by, among others: Microsoft, Person Foundation, UN Habitat, Indonesian governments and Council of Europe. Supporting the successful convening of Youth Time Global Forum 2016 in Jakarta, the first time in Southeast Asia, Niwa looks forward to forge his contribution with Youth Time community at the regional and global level.

Marija is currently writing a Magister’s thesis in English literature at University of Pisa, Italy. She graduated from the Department of Comparative Literature and Literary Theory at the Faculty of Philology in Belgrade, Serbia. Marija speaks five languages, has been a volunteer for several organizations, participated in various international conferences and she works in the field of journalism, translation and education. A passion for theater dates back from her adolescent period and remains one of her greatest interest. Beside that her interest lies in writing, painting, photography, psychology and traveling.

2nd year ambassador. After a nearly fatal accident Jonathan Fritzler experienced a profound Awakening. During his recovery, he began receiving visions of his future path. It was his call to a higher purpose. It was a call to serve the world. Now Jonathan is on a mission to impact the world through innovative approaches toward education, business, sustainability, and strategy. He is the author of the book “Hack Your Education”. While studying business at the University of Hawaii he used his school research build a million dollar recording studio in Honolulu. Now his organization EducationEnergy.net has helped mentor thousands of students Hack their Education and use their projects as tools for their future. Fritzler has given a TED Talk called “The Education Energy Movement”.